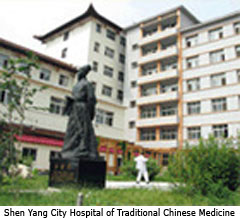 Dong Qing Cai has practiced as a Doctor of Acupuncture-Moxibustion, Chinese Medicine and as a recognized Neurologist in China for more than 16 years. He studied for 8 years at Liao Ning University of Traditional Chinese Medicine as well he studied Western medicine at the Medical University of China and graduated with a degree in Acupuncture, Chinese and Western medicine and Neurology.

He started practicing in China as an Assistant Doctor, and quickly became Doctor-in-Charge. His last position, before he arrived in Canada, was as Vice-Professor doctor and Director of the Department of Acupuncture at Shen Yang Teaching Hospital and Chinese Medical Research Institute. As Vice-Professor doctor, he was responsible for overseeing the work of a team of 40 doctors and nurses. Under his direction, his department was recognized as the best in the province of Liao Ning (population of 43 million people).

During Dong's tenure at Shen Yang, he was also the Head Consultant for Rare Diseases. He also supervised a number of clinical trials and authored a number of research studies.

In 2000, Dong Qing Cai was selected as one of the "Ten most prominent Professionals Youths of Shen Yang City"(population 7.4 million), and was honoured with the award for excellence as a "Prominent Leader of Traditional Chinese Medicine" in his province of Liao Ning.

Dong Qing Cai and his family immigrated to Canada in 2002, where they settled in Vancouver, BC. Dong Qing Cai began studying to improve his English and soon took and passed the BC exam to become a registered Acupuncturist.

He and his family then came to Quebec and Dong Qing Cai started to learn to speak, read and write French so that he could take the Quebec acupuncture exams. He passed the Quebec Acupuncture exam after being in Montreal for only five years.

Today, Dong Qing Cai is a recognized Acupuncturist in both BC and Quebec.